I think this was the first time ever that I went out in every weekend of January. Normally I take it a bit slow, but this year I went out a lot already (so it seems). In any way, it was every weekend and yesterday’s destination was Melkweg for Traffic.

Which started perfectly by me exiting my place and forgetting my keys. So before I could depart to Melkweg I had to walk a bit to get my keys from a friends place. So with about an half hour delay I arrived at the Melkweg

I only knew Cari Lekebusch was on the line-up and that was my reason to go. Plus since there would be friends all over the place it’s always a good bet to visit Traffic. Upon arrival I also learned Luke Slater, Tony Rohr and Secret Cinema were on the line-up, so the start was good.

It was a double feature as in both rooms were used. Cari was playing in a nicely filled main room and Lauhaus was opening in a fairly empty old room.

Needless to say I went into the main to listen to Lekebusch. I was glad to hear some uptempo techno again. You don’t hear too much of it anymore, so that was a very nice beginning. Unfortunately I only heard about 20 minutes from his set before Tony Rohr took over and took the party into full swing.

Man was he pounding beats out of his laptop. That was some good ‘ol quality techno. It was so loud, we we’re almost litterally blown out of the backstage by the beats which vibrated throughout the entire venue.

In the Old room William Kouam Djoko took the stage with his live set, which was very funky, an opposite of the main room. Unfortunately my vid is a bit dark, but that didn’t kill the fun.

Back to the main room for a dosis of Luke Slater (who looked old, sorry Luke) who didn’t quite do it for me. So back to the old room where Secret Cinema had started his set. More people followed and the room got filled nicely. I have to admit, Jeroen (Secret Cinema) is a quality artist. He know how to make the people dance and let them have a good time.

It was definetely a nice edition of Traffic. On to the 10 year anniversary…. (in May or so) 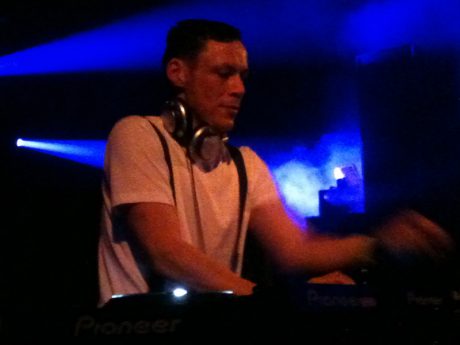