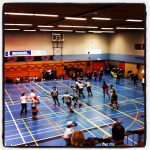 I like sports as much as the next guy, except I like a bit more non-traditional sports. Mostly these sports are a bit more adrenaline packed.

Now there’s one sport which I can only watch since it’s a a girls only sport and no it’s not synchronised swimming. It’s Roller Derby, a sport where girls skate (on rollerskates, not blades) on an oval track.

Here the jammer (the last person) has to pass all the other riders. The girls can (try to) push eachother out of bounds or try to block a jammer from passing. If the jammer does pass, points are scored. That’s the basis of the game.

Ok, so last Saturday I decided to watch another game again since it had been a while since I watched my first. I then came in after the start so I missed the entire introduction and all, but this time I was ‘lucky’ enough to see it.

That’s where the madness started. The teams were introduced by announcing all of the riders nicknames. And I think that’s where it went wrong. Normally nicknames are ‘given’. Think about Karl “The Mailman” Malone (because he always delivered), Lin-Sanity for Jeremy Lin, Wilt “The Stilt” Chamberlain and the list goes on.

Now I know I can’t say too much about nicknames, since I coined the nickname Beee for almost 20 years, but that name was given to me. I didn’t choose it myself, I got it and I only wrote it out for the first time since it was spoken only. I added the e’s, since just one letter is not a nickname, but an abbreviation.

Anyway, the riders of the Roller Derby (most likely) chose their own nicknames (or at least most of them), which resulted in ridiculous nicknames such as “Party Sparkle from Hell”, “Ezekiel 25:17”, “Vegan Vengeance” or “The Horse Whistler” (for one of the refs). One or two of them I thought were cool, like “Kate Push” or “Jamakaze”.

Anyway that was not the reason I started this (intended) rant, it’s what happened about 3 minutes before halftime. One of the Manchester Amsterdam girls got bumped and was probably hit on the nose, which turned into a bleeder. The game was stopped and all riders sat down on one knee. No probs there, but then somebody from the Amsterdam team came out and told the audience no to take pictures and to turn around, face the wall and not look at the incident.

WTF ? I paid money to get in to watch an exciting Roller Derby mtch. Girls get bumped, shoved and pushed. You come out all macho with your team and participate in the game. You act all tough and cool, but when one of the girls takes a hit we have to turn away ???

Imagine Mohammed Ali hitting Joe Frazier to the canvas and the referee asks the crowd to turn away. That ref can kiss his carreer goodbye. Imagine AFC Ajax playing Manchester City (which actually happens on October 24) and Ryan Babel (Ajax midfielder) gets kicked down to the grass. What do you think happens to the ref if he asks the crowd to turn around ? That ref would get FUCKED UP !

Now I don’t know if this is something which happens at all Roller Derby injuries, since I’ve never seen (or heard about it) before, but if it something ‘official’ I think it’s dumb. You want to participate in an action sports with spectactors ? Then don’t start bitching and winig when some blood flows.

And that is what I wanted to get of my chest…

Update (Oct 16): after an interesting discussion on Facebook I learned it’s not a ‘general rule’.